In a study published today in the journal Cell,  UC Berkeley Nutritional Sciences and Toxicology professor Anders Näär led a group of researchers from 12 institutions in the United States and Europe, to better understand a region on the second human chromosome previously linked to both the digestion of milk and metabolic disorders. They discovered that a microRNA, which are tiny snippets of non-coding RNA that prevent genes from making proteins, is associated with energy storage and metabolic diseases such as obesity, insulin resistance, and type 2 diabetes. 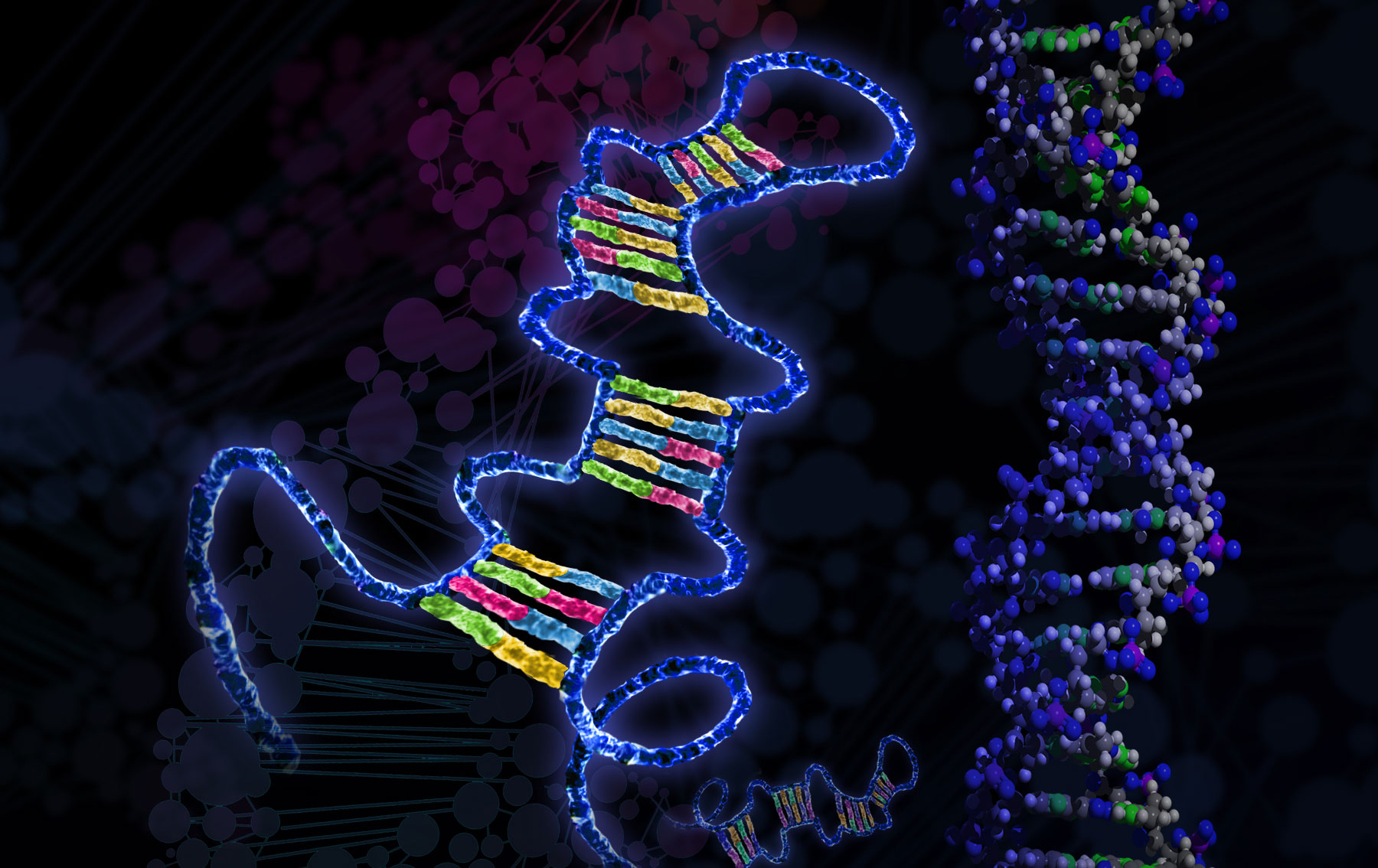 The miR-128-1 microRNA, a tiny snippet of regulatory RNA emanating from the ‘dark matter’ of the genome previously thought to be junk DNA, controls energy metabolism and contributes to metabolic diseases such as obesity and type 2 diabetes. It is linked to human evolutionary selection for survival of famine in ancient times. Graphic design by Jonathan Grenier.

The path to this discovery began with the seemingly unrelated topic of adult milk consumption. For most of human history, humans have been unable to consume milk after infancy because the body stops producing lactase, the intestinal enzyme required to digest the milk sugar lactose, after weaning. About 5,000 years ago, a variant of a chromosome locus containing the lactase gene appeared in Europeans, allowing humans to digest milk into adulthood. Its spread through Europe was attributed to the idea that, in livestock herding populations, adult milk consumption would provide an additional source of nutrition and therefore higher survival rates when food was scarce.

Today, highly developed countries face problems related to nutritional overabundance rather than famine. Due to sedentary lifestyles and ample cheap, calorie-dense food, metabolic diseases are on the rise in many countries. Such conditions as obesity, insulin resistance, and hypertension—all tied to excess food consumption—have contributed to higher rates of cardiovascular disease, diabetes, cancer, and stroke.

For a long time, scientists have puzzled over which molecular and genetic underpinnings in the genome are associated with obesity. While obesity has a clear genetic element, studies have largely failed to find strong support for a single “obesity gene.” Interestingly, researchers had found that the chromosomal region associated with lactase persistence was also linked to obesity and type 2 diabetes. But this did not explain the ability to drink milk in adulthood.

Indeed, milk spoils quickly and archeological records have revealed that herding populations were able to preserve dairy as cheese or yogurt, a process which removes most of the lactose. Individuals without the mutations were therefore likely able to consume preserved dairy products during famines, raising the question as to whether something else in the variant chromosome locus might provide a survival advantage.

Näär, then a professor in the Department of Cell Biology at Harvard Medical School and an investigator at the Massachusetts General Hospital Cancer Center, had previously noticed that the European version of the chromosome 2 locus not only contained the lactase gene, but was also home to a microRNA called miR-128-1, which he and other collaborators had found was a crucial regulator of circulating cholesterol levels.

“We had discovered that miR-128-1 was present in the same chromosome neighborhood as lactase, and the fact that the locus is also linked to metabolic diseases smelled to us like there might be a connection of the microRNA to human evolutionary adaptation to famine,” said Näär.

Most human genotype-phenotype studies focus on protein-coding genes, but the study was novel because the researchers asked if miR-128-1 could play a role as a key metabolic regulator. Though scientists had long thought that microRNAs only played minor roles in cells and tissues, it’s now known that they can carry out important molecular functions—in many instances, by controlling complex biological cascades and regulating gene expression. Näär and the team posited that miR-128-1 contributes to the energy storage trait, and that this could also link to the ancient lactase adaptation, as well as the diseases associated with excess nutrition.

In obesity tests using mice, the researchers interfered with the miR-128-1 function either by genetic deletion or by therapeutic molecules. Test mice lacking functional miR-128-1 burned more energy, had much diminished fat stores, and were protected from insulin resistance, a precursor to type 2 diabetes. The findings suggest that miR-128-1 indeed plays a central role in controlling metabolism, by promoting energy storage via fat accumulation.

“The results were quite striking,” said Näär. “They show that a microRNA acting as a master regulator of the energy storage programs in many metabolically active organs may contribute to metabolic diseases such as obesity and type 2 diabetes linked to nutritional overabundance, as well as genetic selection in humans for obesity and type 2 diabetes.”

The study offers a potential route for clinical therapy to treat metabolic disorders and could have significant implications for public health. Traditionally, drugs to treat metabolic disorders focus on genes and proteins, but the study highlights the importance of non-coding microRNAs as possible therapeutic targets. Theoretically, the therapeutic targeting of miR-128-1 in humans could provide similar improvements in metabolic health.

“This is a fascinating detective story that brings together ancient evolutionary traits that date back to human domestication of animals and adapting to milk products, together with the current epidemic of obesity and metabolic dysregulation that contribute to both heart disease and cancer risk,” said Daniel Haber, MD, PhD, director of the Mass General Cancer Center. “And the guilty party appears not even to be a real gene, but rather a small piece of regulatory RNA that controls how groups of genes are coordinated. It’s a beautiful story and totally unexpected.”