Implications of the Drought for California Agriculture 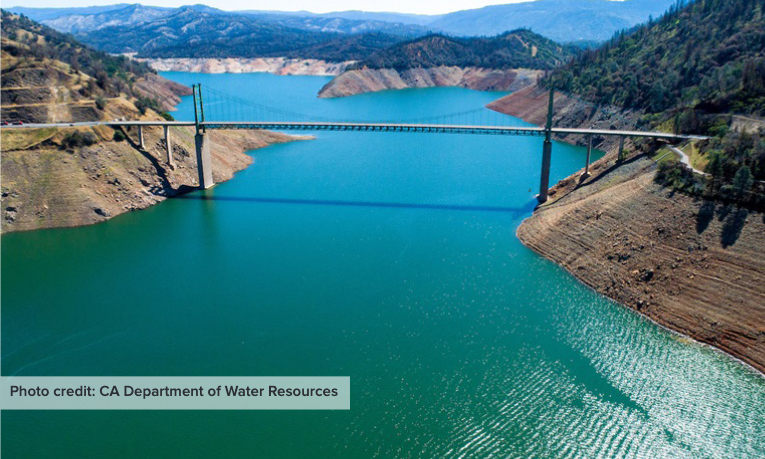 The 2020–21 drought has been unusually severe. Low precipitation, coupled with high evaporative demand has affected irrigated agriculture and livestock pastures. Yet California agriculture is adept at adapting. The authors of a new special issue of ARE Update find that, despite record-setting drought conditions and hundreds of thousands of acres left unplanted, California farms and ranches, as a whole, may generate normal revenue in 2021.

Ellen Bruno, an assistant Cooperative Extension specialist in the Department of Agricultural and Resource Economics, is a co-editor of the special issue and the author of the conclusion section of the publication.

The 2020 water year (which runs from October 2019–September 2020) was dry and hot in California, with the warmest April through September since 1895. It was followed by the third driest year since 1895—receiving about half of the average 20th century rainfall. Consecutive years with record-setting warm, dry conditions have led to higher evaporative demand.  Some regions, particularly the Sacramento basin, have been hit especially hard by this ongoing drought.

California farms have adapted to the resulting water shortages by transferring scarce irrigation water to crops that have a higher expected net revenue per drop, such as fresh produce and nut crops, while leaving some fields unplanted. Due to the decreased pasture forage available, livestock producers have had to cull mature cows and ship more feeder cattle out of state.

The drought’s impact on farm revenues and prices in California has varied across crops and regions. Coastal agriculture (e.g., vegetable, berry, and winegrape production), which accounts for 25% of farm output, is less susceptible to irrigation cutbacks. According to the publication, consumers will notice few major price increases for California produce because farmers shifted water to these high-revenue crops in which California specializes.

The special issue on drought concludes with an explanation of policy changes that have improved the California water system in the past and envisions how we might further change policy to mitigate impacts of future droughts. Legislations such as the Sustainable Groundwater Management Act (SGMA) will facilitate adapting to new climate realities by incentivizing water trading and banking, which allow water users to better allocate water across space and time.

Most groundwater agencies are still assessing the best way to bring their overdrafted groundwater basins into compliance with SGMA, with almost 80% planning to recharge groundwater through increasing supply (e.g., recharge or surface water trading) rather than reducing water demand (e.g., pumping restrictions).

“No one single solution exists for California’s water challenges, but there’s a lot of potential to make improvements to the current system,” said Bruno. “Improving the allocation of water through various policy changes could help water users adapt to water scarcity.”

To learn more about the impact of the ongoing drought on California agriculture, read the full issue online.

RT @ESPM_Berkeley: On Dec 5th, the Cal Forestry Club will host its annual Christmas tree sale at the south side of Mulford Hall from 9am to…

RT @UCBerkeleySPH: The 3-year Toxic Tides study from @rmfrosch and colleagues at @UCLAFSPH is the first systematic look at the #Environment…

RT @BerkeleyGse: Our @UCBerkeley undergrads in @TravisJBristol's "What is the Role of Race in Urban Schools?" class shared their provocati…